Certain crickets occasionally invade homes and become a pest by their presence. Homeowners complain of their monotonous chirping, which can be annoying especially at night when trying to get some sleep. Indoors, some crickets can feed on a wide variety of fabrics, foods and paper products. Cotton, linen, wool, rayon, nylon, silk and furs are susceptible, along with soiled fabrics, sizing from wallpaper, glue from bookbindings, fruit, vegetables, meat and even other crickets. An occasional cricket or two in the home usually presents no serious problem. However, large populations may congregate around lights at night, making places unattractive.

Identification
Crickets get their name from the high-pitched sound or "chirp" produced when the male rubs his front wings together to attract a female. Listening to their song can identify different kinds of crickets.
The "True Crickets" (House, Field, Ground, Tree) resemble long horned grasshoppers in having long tapering antennae, striculating (singing) organs on the front wings of the male and auditory (hearing) organs on the front tibiae (4th leg segment).
House Cricket 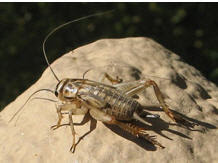 Adults are about 3/4 to 7/8 inch long, light yellowish-brown (straw-colored), with three dark bands on the head and have long, slender antennae much longer than the body. Wings lay flat on the back but are bent down abruptly on the sides. Females have a long, slender, tube like structure (ovipositor) projecting from their abdomen (spearhead at the tip) for egg-laying. Both males and females have two antenna-like (cerci) attached to the sides at the end of the abdomen. 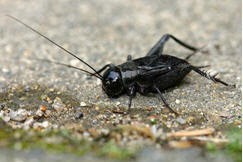 Adults range in size from 1/2 to 1-1/4 inches long depending on the species, are usually black-colored (sometimes brown), have long, slender antennae and a typical stout body (more robust than the house cricket) with large "jumping" hind legs. The ovipositor may be up to 3/4 inch long. Females have three easily seen appendages coming out of the tip of the abdomen, whereas males have only two. Most chirp and may sing both day and night.
Camel (Humpback) Cricket 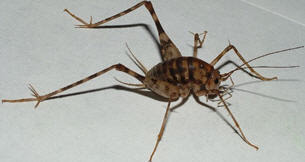 Adults, sometimes called cave or cellar crickets, are a little over 3/4 inch long, light tan to dark brown (darker bands on some segments), wingless, with head bent downward, back arched (humpbacked appearance), large hind legs and long antennae. This is the most common cricket encountered by our technicians in the field.

Life Cycle and Habits
House Crickets normally live outdoors especially in garbage dumps, preferring warm weather, but will move indoors when it gets colder usually in late summer. Overwintering occurs outdoors in the egg stage. Each female can lay an average of 728 eggs with the immatures (nymphs) resembling the adults except being wingless. Nymphs molt seven to eight times and reach adulthood in about 60 days. Also, these crickets can live indoors, completing their life cycle with eggs laid in cracks, crevices and other dark areas such as behind baseboards.
Adults are very attracted to lights, and become active at night (hide during the day) to crawl, jump or fly sometimes in countless numbers up the sides of houses, entering openings of even second and third story windows and roof skylights. The continued, monotonous "chirp" is loud and distracting, resulting in lost sleep. They will feed on silk, woolens, nylon, rayon and wood. They can bite when handled carelessly. They are found in fields, pastures, lawns, roadsides, and in woods.
Field Crickets over winter as eggs or nymphs in moist, firm soil. Each female lays between 150 to 400 eggs, which hatch in the spring. Nymphs resemble adults except are smaller and wingless, molt eight to nine times and reach adulthood in about 90 days. They are serious agricultural pests feeding on many crop plants. They become household pests in late summer and early fall when they move out of fields and into buildings. They can damage furniture, rugs and clothing and the "chirping" of adult males can be irritating. They are readily attracted to lights, can fly and are often found around dumpsters. Large swarms may invade well-lighted areas covering streets and the sides of buildings black with crickets. They feed on nylon, wood, plastic fabrics, thin rubber goods and leather. Outbreaks occur when rainfall follows a period of drought.
There are many different kinds and sizes of field crickets, none of which are able to survive and reproduce in buildings. They are found outdoors in similar places as are house crickets, especially under stones or boards, entering cool, moist basements in hot summers.
Camel Crickets are active at night in cool, damp, dark areas and occasionally invading damp basements or crawlspaces. They are not attracted to lights nor produce songs. Overwintering occurs as nymphs or adults in protected places. They may be found living in large numbers, causing alarm. Some textiles may be damaged. Some hide under hay bales, feeding on other insects seeking shelter there. Most are found in caves, hollow trees, under logs and stones and in other dark, moist places. They can live and reproduce indoors.
Control Measures
Crickets are usually active at night (nocturnal), prefer shelter in cracks and crevices and invade homes seeking moisture. An occasional cricket or two in the home usually presents no serious problem. They are seldom-serious pests in the home.
Prevention
Sanitation is the most important means of eliminating nuisance crickets. Keep all areas in and around buildings free of moisture, dense vegetation and weeds (1 foot band next to foundation). Mow lawns, cut weeds, and clean up garbage collection areas. Remove harborage sites such as piles of bricks, stones, rotting wood and other debris. Caulk and seal all cracks and crevices, especially near the ground level at basement windows and doorways.
Make sure that all windows and doors are tight-fitting with proper screening in place. Exclusion is an important factor as well as light discipline. Avoid bright mercury vapor lights in entryways and along structure perimeters since crickets will be attracted from far distances. Convert to sodium vapor yellow lights (less attractive to insects) instead of white, neon or mercury vapor lights.
Never store firewood next to the house foundation. Raise garbage cans off the ground if practical. Trash and dumpsters should be placed as far from the building as possible. Crickets are attracted to food in these areas. Crickets may be troublesome at trash dumps, grassy roadsides, pasture fields and wooded areas (breeding sites) before entering structures. They may be found under decks and plastic storage bins. Crickets can be killed with a fly swatter, collected by vacuum cleaner or broom and dustpan and discarded, if a few are present. Sometimes pet owners, who keep cricket-eating animals, accidently allow crickets to escape. These individuals establish an indoor population.
Insecticides
Heavy cricket migrations are hard to control. It may be necessary to use insecticides both inside and outside the home. Indoors, apply to cracks and crevices, baseboards, in closets, under stairways, around fireplaces, in basements and other hiding places. Use cyfluthrin (Tempo), Acetamiprid & Bifenthrin (Transport GHP), diatomaceous earth, propoxur (Baygon), pyrethrins. A can of aerosol household insecticide spray can kill occasional invaders.
Outdoors, when populations are large, treat a swath around the house foundation with, Intice Granules or propoxur (Larva-Lur, Baygon) bait. It is best to perform this treatment in the late summer moths or early fall to reduce or prevent the migration indoors.
Only the licensed pest control operator or applicator can use cyfluthrin (Tempo), Acetamiprid & Bifenthrin (Transport GHP). Outdoors in moist habitats, wettable powder or microencapsulated insecticides work well. Before using any insecticide, always read the label and follow directions and safety precautions.

Pest of the Month is brought to you by Magic Pest Management, a pest control company based in New York City and Long Island.
Posted by Unknown at 10:48 AM No comments: