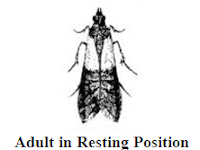 Sometimes mistaken as clothes moths, homeowners first notice small moths flying in a zigzag fashion around rooms (kitchens and pantries) in the home. These moths fly mostly at night and are attracted to lights and may appear in the living room near or in front of television sets. Occasionally, the larvae or "white worms with black heads" crawl up walls and suspend from the ceiling attached to a single silken thread. Other times, a few larvae may be found in a food package along with unsightly webbing, cast skins and frass (fecal pellets). It is repulsive to the homeowner and costly to the manufacturer. Packages of whole wheat, graham flour and corn meal are often infested. Most complaints in New York occur during the months of July and August, but often appear in the Spring as the weather warms above 55º. Some adult moths do fly into the home during summer months through open doors or windows, but most "hitchhike" inside in packaged goods and groceries. Not only homes, but restaurants, grocery stores, warehouses, pet stores, seed companies, mills etc., become infested.

Identification
Adult moths are about 3/8-inch (8 to 10mm) long when at rest and have a wing spread of about 1/2 to 3/4 inch (18 to 20mm). When viewed from above with the wings folded over the back, the outer 2/3 of the wing appears reddish-brown or bronze colored "at the wing tips" while the inner 2/3 of the wing "at the basal portion" is light gray to ochre-yellow. Also, the head and thorax are reddish-brown and the hind wings gray. The larvae or "caterpillars" are about 2/3 inch (12.5mm) when mature. Brown-headed larvae are dirty white, sometimes tinged pink or green. Larvae are quite active and molt four to seven times before pupating. Pupae are reddish-brown and about 3/8-inch long. Eggs are grayish to dirty white and from 0.3 to 0.5mm long. 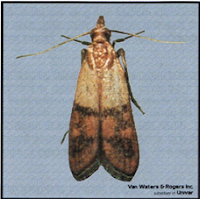 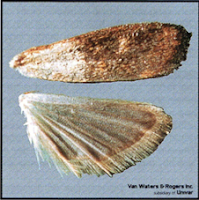 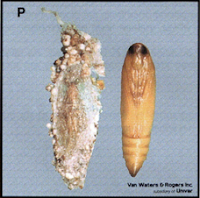 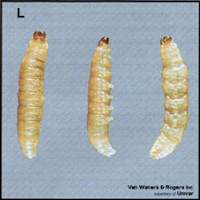 Life Cycle and Habits
The female moth lays between 60 and 300 eggs, singly or in clusters, on or near the foodstuffs. Eggs hatch in 2 to 14 days with larvae or "tiny whitish caterpillars" dispersing within a few hours. Larvae move to foodstuffs, and feed in or near a tunnel-like case of frass and silk which they web together. Some food becomes matted with silken webbing. The larval stage is the feeding or "pest stage," and may range from 2 to 41 weeks, depending on the temperature. In stored grains, feeding is done at the surface. When ready to pupate, mature larvae leave their tubes and spin a silken cocoon. They often migrate or "wander" a considerable distance from their food source before finding the pupation site, often in cracks and crevices. Some crawl up walls to where the wall and ceiling meet or crawl to the top of the cupboard to spin the cocoon in which they pupate and from which new adult moths emerge. Mating occurs and the life cycle is repeated. The life cycle may range from the shortest period of four weeks to the longest of 300 days. Under good conditions, the entire life cycle requires six to eight weeks. However, in cold climates, larvae overwinter and pupate in March. Moths emerge in April. Generations overlap as the season progresses. There may be five generations per year in some locations. The life cycle depends on temperature, taking two to six months in temperate zones and three to four weeks in warm climates.

Control Measures
1-Before purchasing, examine foods such as milled cereal products, flour and dried fruit for infestations. Examine broken and damaged packages and boxes to avoid bringing stored pests accidentally into the home. Check the packaging date to ensure freshness.
2-Purchase seldom-used foods in small quantities to prevent long storage periods of a month or more. Susceptible material stored for six months or more, especially during the hot summer months, has the possibility of developing into serious infestations. Store susceptible foods in insect-proof containers of glass, metal or plastic ware with tight-fitting lids, ideally screw-type. Highly susceptible foods, such as spices, can be kept in the refrigerator and other foods in the freezer. Always use older packages first, and inspect frequently to avoid any spillage which might attract insects. Properly ventilate the storage area to discourage moisture-loving pests.

3-Foods of questionable infestations or even lightly infested can be supercooled or superheated. Place exposed or suspect foods in a freezer at 0°F. for four to seven days or in a microwave oven for five minutes or in a shallow pan or tray in the oven at 140°F for one hour or 120°F for two hours. Spread the material thinly to permit effective cold or heat penetration to kill all life stages of the pest. If in the oven, stir food periodically to prevent possible scorching. Dried fruits can be placed in cheese cloth bags and dipped into boiling water for six to ten seconds to kill external pests. However, seeds saved for planting may have the germination reduced after superheating or cooling. Sifting the food material will remove possible insect fragments and any remaining will not cause harm if consumed. After insects are killed, contaminated food might be used outdoors during winter months for bird feed.
4-Careful sanitation is the best method to avoid stored product pests. After removing all food, food packages, utensils, dishes, etc. from the cupboard, shelves or storage area, use a strong suction vacuum cleaner with proper attachments to clean up all spilled foods (toaster crumbs, cornmeal, bits of pet food, raisins, etc.) from cracks and crevices, behind and under appliances and furniture. Pull out heavy appliances from the wall and scrub with soap and hot water. The ability of these insects to find a small amount of food and survive is amazing. After shelves are thoroughly dry, cover with clean, fresh paper or foil before replacing with food or cooking utensils. Remove and destroy any cocoons found in cupboards and other sites.

5-Locate the source of infestation and quickly get rid of it. Dispose of heavily infested foods in wrapped, strong, plastic bags or in sealed containers for garbage disposal service or bury deep in the soil if permitted and practical. If detection is made early, it may be the only material infested and the problem is solved. Be sure to carefully examine seldom-used foods, especially in least disturbed storage areas. One can spread suspected foods on a tray to determine whether infestation is widespread. Inspect unopened cardboard boxes since pests can chew into these boxes and plastic inserts.
6-Pheromone traps are commercially available for inspection, monitoring, and pinpointing infestations of adult Indianmeal moths. Insects use pheromones to communicate with each other, and are natural compounds created in the insect body. Many have been isolated in the laboratory and now used to lure insects into sticky traps.
Adult moths live only five to seven days with their major function to reproduce. Male moths are attracted to pheromone scent (sex-attractant). Traps can be hung indoors next to the ceiling, behind shelves, etc. to capture moths on a sticky board. In food warehouses, some use five traps per 1,000 square feet. A few well-placed traps can detect moths. About one in eight Indianmeal moths that approach a pheromone trap enters it. The trap alone is a "monitoring tool" not a control method.

If you suspect you have an Indian Meal Moth problem, contact Magic Exterminating to see how our New York City Pest Control procedures can help stop the infestation, and prevent future problems..