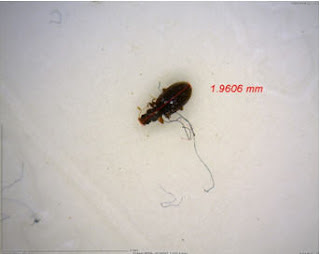 Fungus beetle is a general term covering several different beetles associated with damp, humid conditions where fungi, molds and mildew occur. When new homes are built, moist uncured lumber and/or freshly plastered or papered walls that become covered with molds, attract these beetles. Some occur in sawdust left in wall voids after construction. They often build heavy populations throughout late summer and early fall. These mold-feeding beetles sometimes are found in decaying plant material, woodpiles, mammal, ant or termite nests, damp cereals, grains, herbs, spices, cheese, jam, jellies, fibers and carpeting, especially in cellars. Attracted by lights, these small beetles, can crawl or fly through window or door screens, and then wander aimlessly. Heavy populations may first show up trapped in bathtubs, sinks or around lamps and TV sets. They are simply a nuisance by their presence and do not bite, sting, spread human diseases nor damage wood, food, fabric, etc.

Identification
The foreign grain beetle is camel-brown colored and about 1/16-inch long with a conspicuous rounded lobe or "knob" on the four corners of the thorax (area between the head and wing covers). The body is covered with dense pubescence (short, fine hairs) and dimple-like punctures with clubbed antennae. Other fungus beetles are less than 1/12-inch long with body color varying from yellowish to black. Also, most have punctures on the body and clubbed antennae. A good quality hand lens or microscope is necessary to see these characteristics.
Life Cycle and Habits
Most complaints of these nuisance beetles occur in late July, August, and September. Beetles often become quite abundant, especially after a period of rainy weather. However, development from egg to adult depends on temperature. Some beetles complete their life cycle in 25 to 36 days at 75 deg F., in 54 days at 65 deg F., or up to five months and longer at lower temperatures. Beetles are attracted to lights and feed entirely on the spores and hyphae of fungi. Later, eggs are laid on food material such as poorly-seasoned green lumber, wet plaster and wall board, moldy grains, etc. Larvae develop in the molds, maturing to adults later. Sometimes, stored foods may become contaminated from cast skins and excreta. Also, infestations are associated with poor ventilation, high humidity, plumbing leaks, etc.
Control Measures
Most infestations are temporary and self-limiting, but their presence is objectionable to many homeowners.
Prevention
Often it is difficult to locate the source of infestation since beetles may be feeding on fungi associated with neglected grains, yeast, moldy flowers, wall voids with rodent and insect nests, decaying plant materials, moldy wallpaper, freshly plastered walls, around moist window cases or poor plumbing. Any action taken to dry out damp conditions supporting fungal growth, essential to these beetles, will greatly reduce or eliminate populations. Most homes dry out naturally within a year or two, and the fungi disappears along with the beetles. Usually adequate artificial heating and ventilation will stop infestations. Periods of dry weather with relatively low humidity (below 60 percent) will reduce numbers. Be sure that dry foods are stored in insect-proof containers (glass, heavy plastic or metal) ideally with screw-type lids free of mold. A strong suction vacuum cleaner with proper attachments will collect many beetles.
Insecticides
If moisture problems cannot be corrected, commercial household labeled fungicides may be effective in eliminating fungal growth in selected areas. Household aerosol sprays of pyrethrins will kill many beetles when applied in crevices under baseboards, around windows, doors and lights. Repeat treatments will be needed to control newly emerging adults. Residual contact sprays will help give control.
Dust formulations are applied into wall voids and other hard to reach places can be effective. Before using any insecticide, always READ THE LABEL and follow directions and safety precautions.
Reference: Ohio State Pest fact Sheets

If you've noticed problems with Fungus Beetles in your New York City business or residence, contact Magic Exterminators today to resolve the issue.
Posted by Unknown at 7:05 AM 2 comments:

Adults are between 5/16 to 5/8 inch long, dull to grayish or reddish brown above and silvery gray on the underside of the body. Many have long slender bodies with long, slender legs and antennae. The front legs are short and modified for grasping while the middle and hind legs are long, like stilts with claws. These insects creep on the surface of running water or pools in a slow deliberate gait where they feed on live and dead insects, crustacea and other organisms. They overwinter as adults. Long, cylindrical eggs are laid during spring and summer in parallel rows glued to objects at the water's edge. Adults are called "skaters" or "Jesus Bugs," apparently for their ability to walk on water of ponds, lakes and streams.

These insects are found in residential pools and will bite. The customer would have to shock (use chlorine) the pool. We do not treat for them.
Backswimmers - Notonectidae

Scientific Classification
Notonectidae or backswimmers is a family of insects of the Hemiptera order. Back swimmers, or Greater Water Boatmen are hemipteran bugs. They are named backswimmers because they are aquatic predators that swim upside down. They are up to 15 mm in size. They are similar to corixidae, but can be separated by differences in their dorsal-ventral coloration, front legs, and behavior. Their dorsum convex is light colored without cross striations. Their front tarsi are not scoop-shaped and hind legs fringed for swimming.

The size of air bubble that provide buoyancy changes as the nitrogen dissolve into the blood and the oxygen is used in respiration. Notonectidae carry extra oxygen supply using haemoglobin in their abdomen. This helps them regulate the size of its air bubble and the concentration of oxygen inside it. [1]

Backswimmer swimming on its back
The main genus of backswimmers is Notonecta- streamlined, deep-bodied bugs up to 16 mm long, green, brown or yellowish in colour. As the common name indicates, these aquatic insects swim on their backs, vigorously paddling with their long, hair-fringed hind legs.

Backswimmers are predators and attack prey as large as tadpoles and small fish, and can inflict a painful bite on human finger. They inhabit still freshwater, e.g. lakes, pools, marshes, and are sometimes found in garden ponds. They can fly well and so migrate easily to new habitats.

The Common Backswimmer is Notonecta glauca, widespread in the United Kingdom and Europe. Another species is N. maculata, distinguished by mottled brick-coloured forewings.
This is another insect found in residential pool and may bite clients. Again the homeowners must shock (use Chlorine). We do not treat for them. 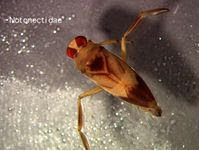 External links
Close-up photo by J. Hlasek
Retrieved from "http://en.wikipedia.org/wiki/Notonectidae"
Posted by Unknown at 7:07 AM No comments: