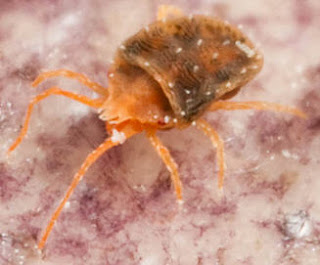 Clover mites sometimes invade homes in enormous numbers, in early spring and late autumn, overrunning floors, walls, drapes, window sills and furniture, even occasionally getting into beds and clothing. They may become troublesome in hospitals, nursing homes, apartments, food processing facilities, etc. If crushed, they leave a reddish stain quite noticeable on linens, curtains, walls and woodwork. They are a nuisance by their presence but do not bite humans or animals, transmit disease nor feed on household furnishings or pantry supplies. Skin irritation may be caused in sensitive persons. They live outdoors, feeding on various plants.

Identification
Clover mites are about 1/30 inch long (smaller than a pinhead), oval-shaped arachnids, reddish-brown to olive to pale orange or sometimes green-brown after feeding. They are eight-legged with the front pair of legs very long, protruding forward at the head. These front legs are sometimes mistaken as antennae or feelers. There are featherlike plates on the body and fan-shaped like hairs along the back edge of the body when viewed under a magnifying glass. Young are smaller and bright red. Also, eggs are bright red. Crawling mites are sluggish, slow-moving and normally invade the home where the sun is warmest at south, southwest and east side of the house.

Life Cycle and Habits
Clover mites develop from unfertilized eggs (no males needed). Females lay about 70 eggs each, singly or in masses, in cracks and faults in concrete foundations, in mortar crevices, between the building walls, under loose bark of trees, and other protected places. Eggs lay dormant during the hot summer, hatching in early autumn when temperatures fall below 85 degrees F, followed by two nymphal or resting stages and the adult. Each stage lasts two to six days, and the life cycle is completed outdoors in one month with two or more generations per year. Mites may live one to seven months depending on climatic conditions. Most mites over winter as eggs, but all life stages can be present. Over wintering eggs hatch in early spring. Mites can be found infesting homes from November through June and again in the autumn months. They are sensitive to temperature changes (most active between 50 to 75 degrees F) and tend to move upward as the sun warms the surface above them. They may invade the home during the summer if host plants are dried up or cut off. Hosts include grasses (heavy feeding gives a silvered appearance), clover, dandelion, shepherd's purse, strawberry and iris, to name a few. Most heavy outbreaks occur in early spring in well-fertilized lawns growing close to the house foundation on the sunny side of the house; although in the fall, thousands of clover mites may congregate on vegetation around homes and on foundation walls, crawling into protected places as cold weather arrives. They hide under shingles, under siding, behind window and door casings or even indoors, becoming active again in the spring.

Prevention
Remove all grass and weeds (lush vegetation) from around the house foundation perimeter, leaving a bare strip 18 to 24 inches wide, especially on the south, southwest and east sides of the building. Mites will not cross-bare, loose soil as readily as grassy surfaces touching the foundation. This bare strip can be planted with flowers such as geranium, zinnia, wallflowers, marigold, salvia, rose, chrysanthemum and petunia, or shrubs such as juniper, spruce, arborvitae, yew or barberry, which are unattractive to these mites deterring buildup and migration. An application of pea gravel in the strip will also discourage mite invasion. Some apply bark mulch, stone or black plastic. Be sure to seal cracks and gaps or other points of entry with caulking compound, putty and weather stripping around foundations, windows and doors. Use tight fitting screens on windows and doors.

Insecticides
It is best to use a perimeter spray barrier around the outside of the house during the mite invasion period. Outdoors, spray the foundation, exterior walls up to the bottom of the first floor windows, and always follow label directions. Treatment from the foundation out into the grass should be performed when permitted. Spray the foundation and walls and the vegetation until it is thoroughly wet. Materials labeled for this use include pyrethrins (Exciter, Microcare, Pyrethrum, Pyrenone). Granules may be used if labeled. Some additional products may be used indoors and out are PT 221L, PI, Steri-fab, and Tri-Die. We must read the labels carefully for treatment procedures. A product like Transport GHP may be use outdoors only. Spot applications can be made to cracks and crevices at baseboards, around windows and doors and between windows and screens with labeled materials. Before using any insecticides, be sure to read the label and follow directions and safety precautions.

Clover mites can be a huge problem in New York City and Long Island this spring. Its best to contact a professional exterminating company in your area to resolve any issues.
Posted by Unknown at 11:56 AM