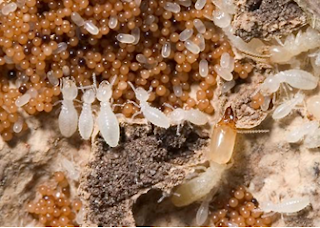 Habit:
Live in colonies underground, from which they build tunnels in search of food; able to reach food above the ground level by building mud tubes; dependent on moisture for survival.

Diet:
Wood and other cellulose material.

Reproduction:
Different rates of growth from egg stage to adult depending on individual species; one queen per colony, which can lay tens of thousands of eggs in its lifetime, but most eggs are laid by supplementary reproductives in an established colony. 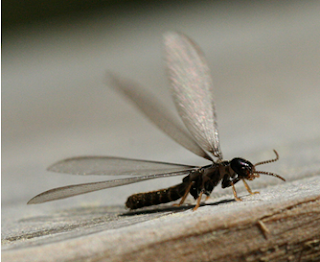 Other:
Termites cause over $2 billion in damages each year. Subterranean termites cause 95% of all termite damage in North America. Colonies can contain up to 1 million members.

The Sentricon® Colony Elimination System is manufactured by Dow AgroSciences LLC (Indianapolis, IN; 1-800-678-2388; www.sentricon.com/). The Sentricon® System is sold only through pest management firms that have been authorized and trained by Dow AgroSciences. This termite bait was the first to be commercially introduced into the United States and has been marketed since 1995. It is labeled to be used as the sole measure to achieve termite control, without a supplementary soil treatment.

The active ingredient (toxicant) in the Sentricon® System is a slow-acting chemical, 0.5% hexaflumuron (Recruit® II). During 2003, hexaflumuron is slated to be replaced with noviflumuron (Recruit® III and IV). Both of these chemicals are chitin synthesis inhibitors (CSIs) that disrupt the termites' normal molting process, causing them to die in the process of shedding their skin. CSIs can achieve their effects because worker termites continue to molt periodically throughout their life and they comprise the majority of the colony. Furthermore, workers feed other colony members, which starve as the worker population is depleted.

The Sentricon® System is based on a multi-step process that entails monitoring to identify stations that contain active termites, delivery of the toxic bait, and on-going monitoring to detect new termite infestations. Termites are detected by inserting plastic in-ground monitoring stations into the soil at intervals around the building perimeter and at conducive sites. Each in-ground Sentricon® station consists of a cylindrical green tube (10 inches deep by 2 inches wide) with slits for termite access; it is covered by a flat, round disc (locking cap assembly) that lies flush with the soil surface. Initially, two pieces of untreated wood are placed inside each station to serve as the monitoring device. Several of the stations are pre-baited in auxiliary stations during the initial installation process. Once termites have been found in the wood monitors, a treated bait tube is substituted. Termites are carefully dislodged from the monitoring wood and placed into the bait tube where they begin feeding on the bait as they tunnel through it and then eventually reunite with their colony members in the soil. In the process, they deposit trail pheromones (chemical scents) that promote recruitment of other nest mates to the bait. All stations around the structure are inspected on a continuing basis and bait delivery continues until no more live termites are found. Termite elimination is considered to be achieved if no termites are evident for three consecutive months, excluding inclement winter weather that may cause termites to be absent. Bait tubes subsequently are removed and untreated wood is once again inserted and monitored. On-going monitoring at less frequent intervals is useful to detect termites that have re-infested the area.

Above ground bait stations complement the Sentricon® System. These are tan, rectangular boxes containing two treated paper rolls (Recruit® AG) that are positioned above ground over active termite shelter tubes. The use of aboveground stations in combination with in-ground stations can enhance delivery of the bait toxicant to the colony.
The Sentricon® System has undergone extensive evaluation throughout the United States. A large number of field trials with Sentricon® have demonstrated elimination of subterranean termites.
Posted by Unknown at 1:35 PM